Awhile ago I wondered aloud along with many others in New Zealand whether we had an unrealistic expectation of our athletes. New Zealand has a long history of international sporting success but now it seems the competition is getting a lot tougher and deeper. As my own children grow I often wonder how much time, effort and money we should put towards helping them to develop their sporting potential.

It seems that in some sports its quite clear that the majority of the current champions had very extensive early training to get them on their way. Tennis and golf are two examples of this and these are sports New Zealand could quite reasonably expect to excel at for years to come as opposed to say basketball, gridiron (football in USA jargon), baseball, or ice hockey.

For some years now many of the dominant tennis players on the professional circuit have come from the Nick Bolletieri tennis academy in Florida You have to wonder whether a kid who doesn’t pick up a racquet before the age of six even has a look-in at making the big time in tennis. Sampras, Agassi, Capriati, Venus William’s, etc. have flourished in a “total immersion” program of tennis beginning at a very young age.

Tracy Austin, Chris Evert, Andrea Jaeger, Jennifer Capriati and Steffi Graf are a few of the many female players good enough to compete on the pro circuit at age 14 with current number one Martina Hingis arriving at the top spot at age 16. Boris Becker and Michael Chang both won Grand Slam titles at seventeen.

Tiger Wood’s story is one of the best examples of a child who was raised by a parent who’s singular goal in life was to produce a champion golfer. Tiger seems to have handled it all very well(to this point in time) but he’s obviously a very exceptional character. Is that character development from the early training and discipline also? I asked Chris Lewis; one of New Zealand’s’ premier tennis players ( Wimbledon finalist) and coaches,who’s had a lot of personal contact with the professional tennis fraternity; to give his thoughts on the subject. 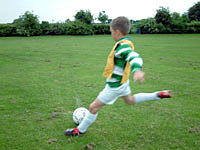 Chris started playing at age 4 as did his brothers Mark and David and said he would have started earlier if there had been miniature racquets available in those days. He was mainly coached by his father until the age of fourteen with his first formal lessons as a seven year old. It would be accurate to say that the determining factor in a the successful child’s’ development is the type and amount of pressure put on the child to excel. Chris feels “One of the most destructive forces in the game today is the pressure some parents put on their child. I would like to know for instance, how many children spend time at academies like Bolletieris’ only because their parents want them to be stars. Inevitably at some point these children; who end up resenting their parent(s) for pressuring them; walk away from the game (and their parents). Those cases aside, the attrition rate for aspiring tennis players at places such as Bollitieris’ is very high. I don’t know what your view is but I am totally opposed to the parent who attempts to turn his or her child into a sports star by pressuring the child to specialise in a particular sport at a very early age. If the child is playing solely to meet parents’ expectations, giving up is inevitable.” I asked Chris what he considered the optimal age for a person to begin a serious program with a coach if they are to have a chance to compete on the professional tennis circuit. He answered “Depending on the maturity of the child, anywhere between the ages of six and twelve- with more of an emphasis on fun in the coaching session for the younger child. To my knowledge there is no player on the men’s pro tour today who started to play after the age of twelve with the majority of players starting to play around six- and some as early as two or three.”

It seems very difficult to give a child a good headstart in a sport without ruling out other activities. There is only so much time in a day. How about school, music, and foreign languages? Getting a child involved in a time-consuming sport also leaves less time for socializing and playing like a normal kid. Yet that seems to be the choice facing the parent(s) who wants their child to have an opportunity to excel. The conscientious parent wants their child to develop into a well-rounded individual. Their child will often be competing with kids whose parent(s) just want their kid to be the best, even to the exclusion of homework and normal family life.

Another difficulty is finding a coach who has enough expertise to teach the proper skills to excel in a given sport while making it fun and exciting so the kid will decide on their own that they want to be there and try hard. The coach has to put together a program to satisfy the needs of the parents as well as the kids or he/she won’t have a sustainable program. I have been very fortunate, as my wife has, to have been involved in programs run by coaches who were able to deliver exactly that type of program year after year, and it does take years to develop into an elite athlete. It seems a “mentor” approach to developing coaches might be worth trying, just as an aspiring pianist or martial artist might train under the guidance of a “master”.

Creating that environment that has the perfect mix of encouragement without the pressure, skill development without the burnout, excellence without excluding development in other areas is the task for the modern parent and its a very tough job. Hopefully all of us can try to create that environment for our children without ever having to receive anything more than their love and respect in return.